The following video is an overview of the sounds, events, and themes explored in No Replica. I filmed each performance using three cameras visible to the audience as if to imply their actions were under constant surveillance. In fact, these recordings were merely for archival purposes, and no one could see the video feeds until after the performance ended.

Each performance began with the audience entering a small area enclosed by curtains. Narrated audio from two speakers initiated the show by providing some basic, loose ground rules. The two microphones situated in the space served no purpose as their cables lay unplugged on the floor. This phase of the performance included prolonged moments of silence or repeated music meant to bore the audience and raise the awkward tension, potentially encouraging individuals to act without instruction, break the ground rules, and explore the theater beyond the curtain. 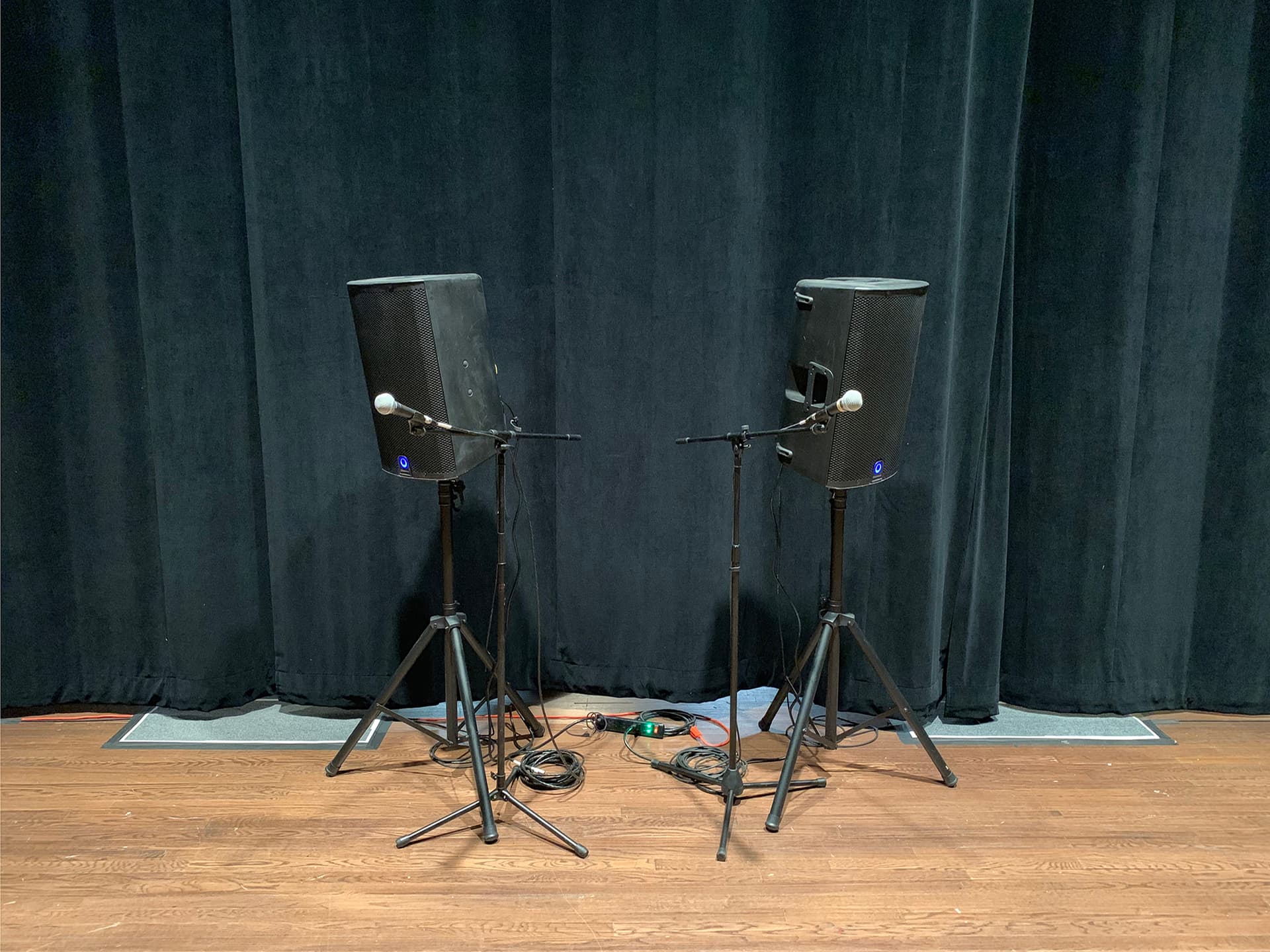 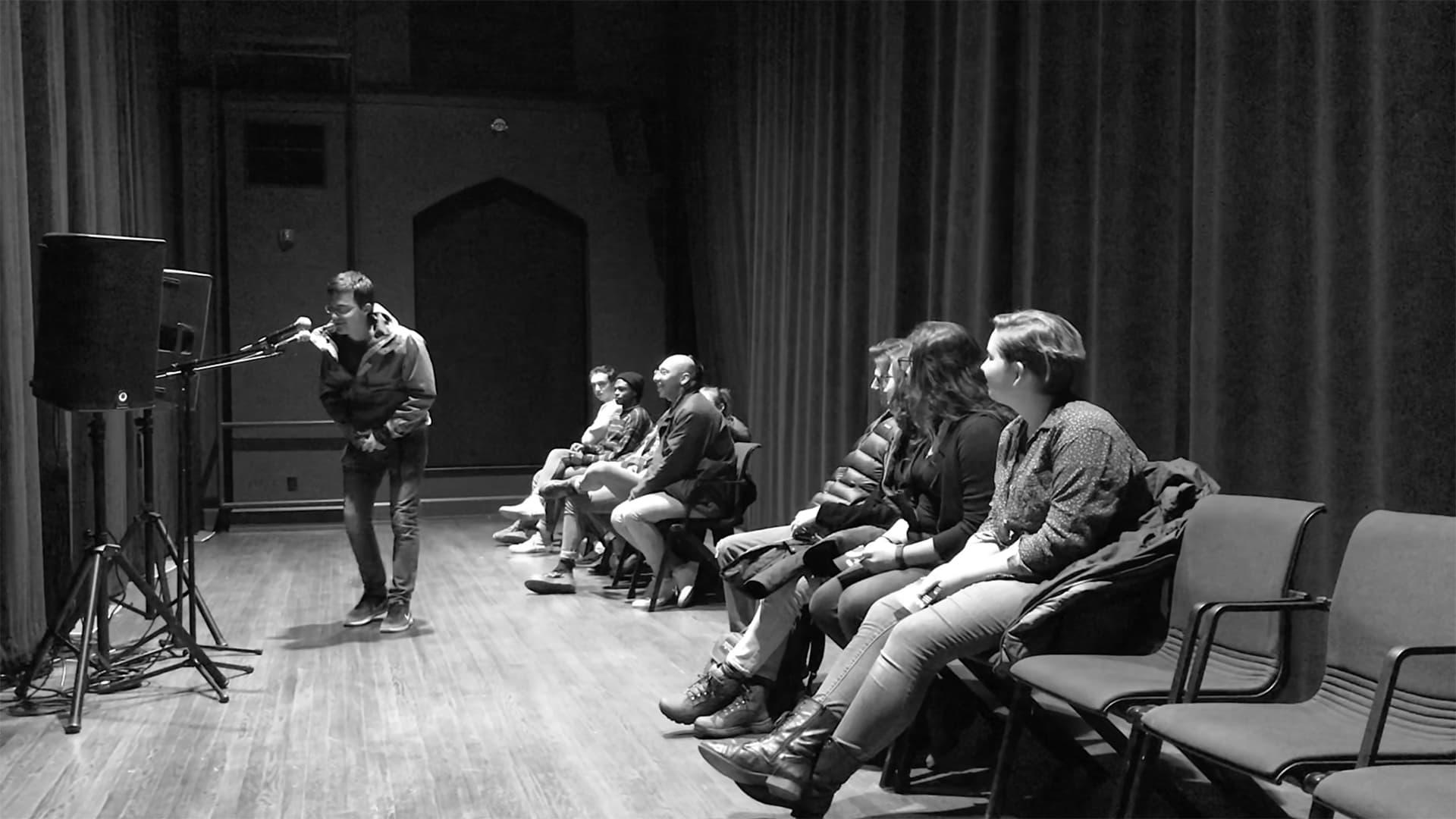 Part 2: Passing Through the Curtain

Most audiences refused to move without explicit instructions. After some time, the speakers instructed everyone to pass through the curtains into the main space. This main area was composed of multiple immersive sets littered with broken or malfunctioning technology, as well as numerous speakers scattered throughout. Much of this equipment was ostensibly plugged-in and active, but only a select nineteen speakers actually worked. I included tens of unused speakers, as well other devices such as illuminated soundboards, computer monitors, and TVs. 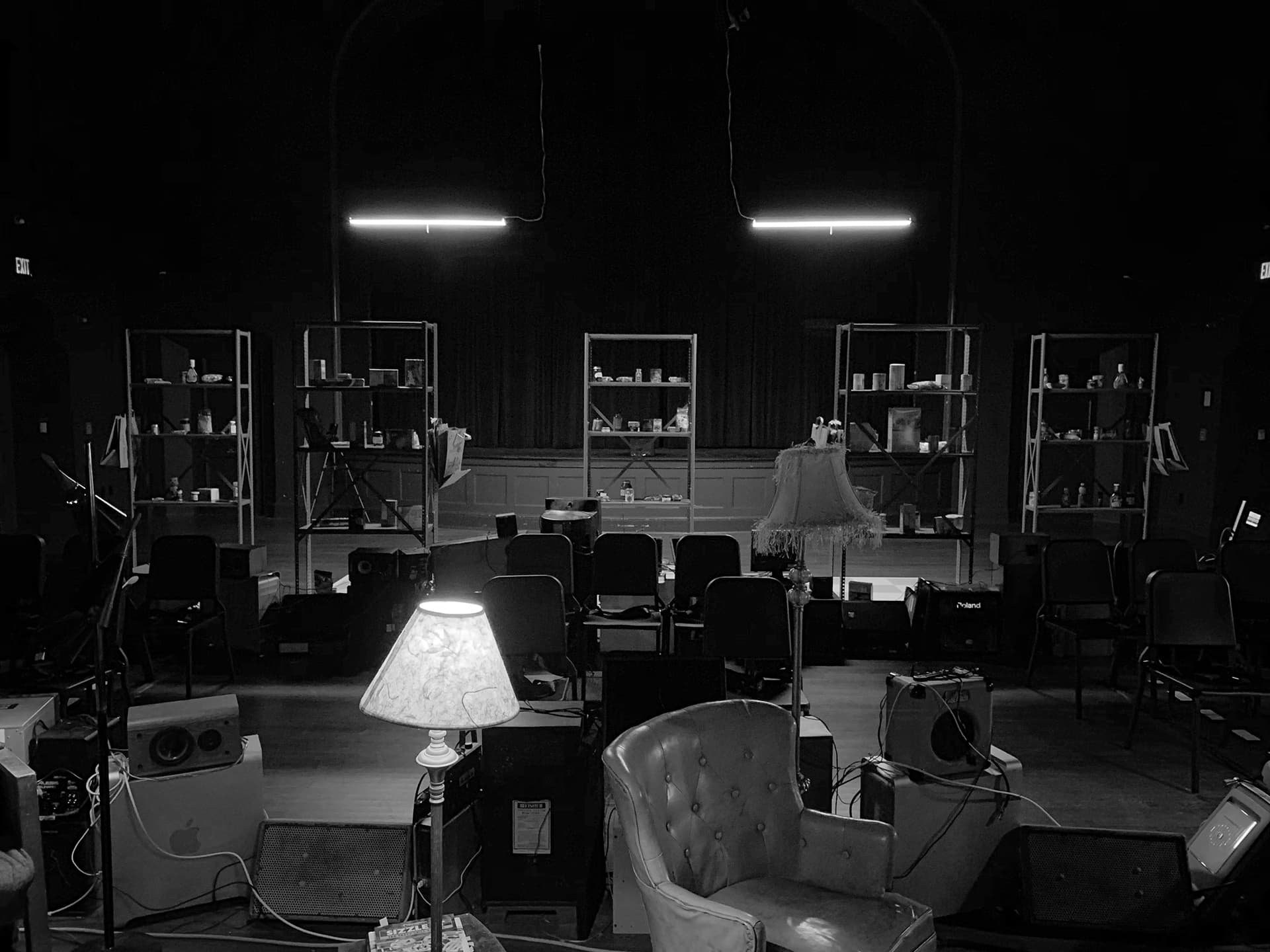 In the larger theatrical space, the pre-recorded narrator began reading an ingredient list and encouraged the audience to interact with a grocery store-inspired set. Throughout this phase, the voice would give indications that the audience's actions were being monitored (which wasn't true). Some audiences laughed, some stayed silent, and some chaotically began dismantling the grocery shelves. 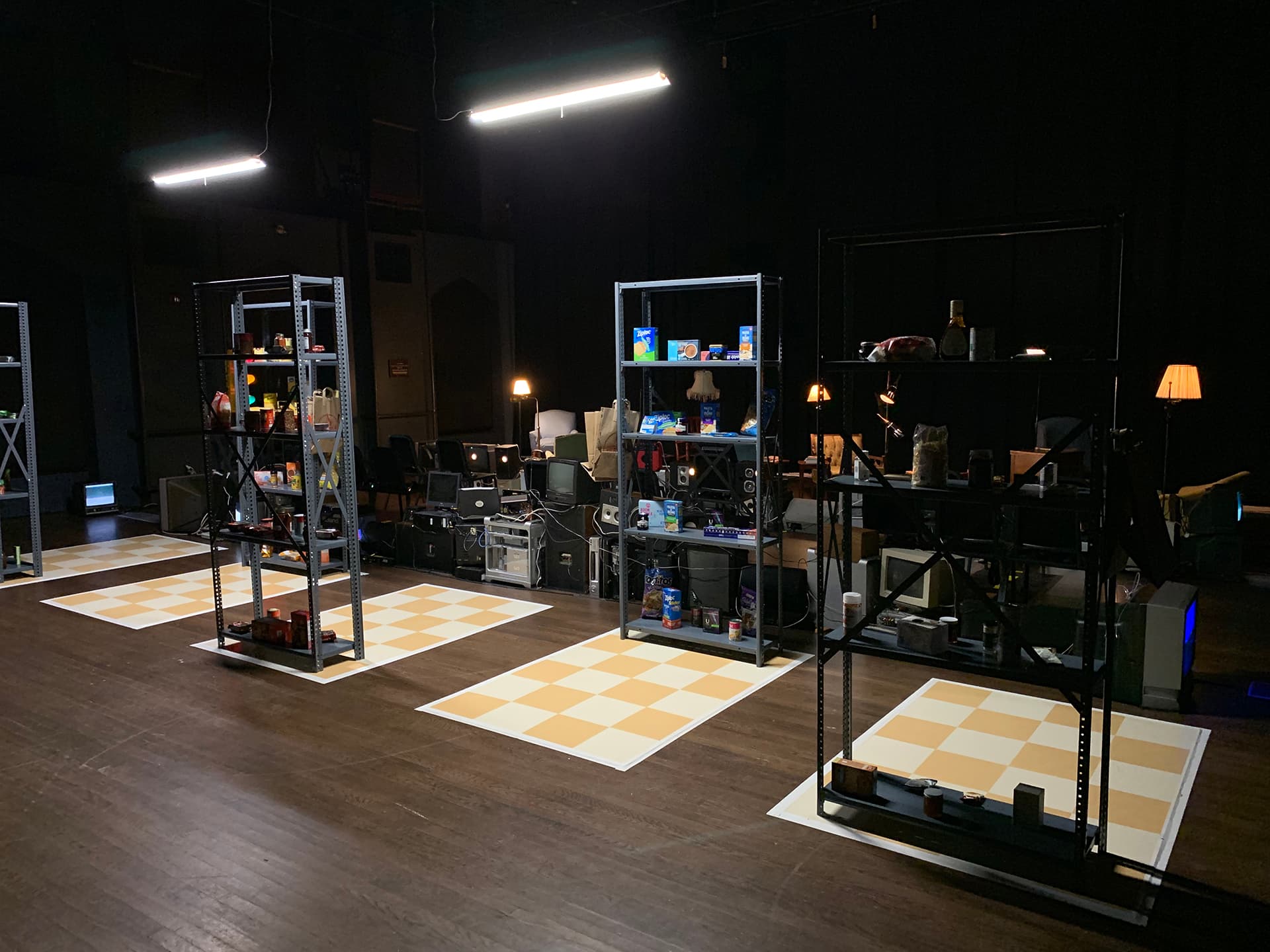 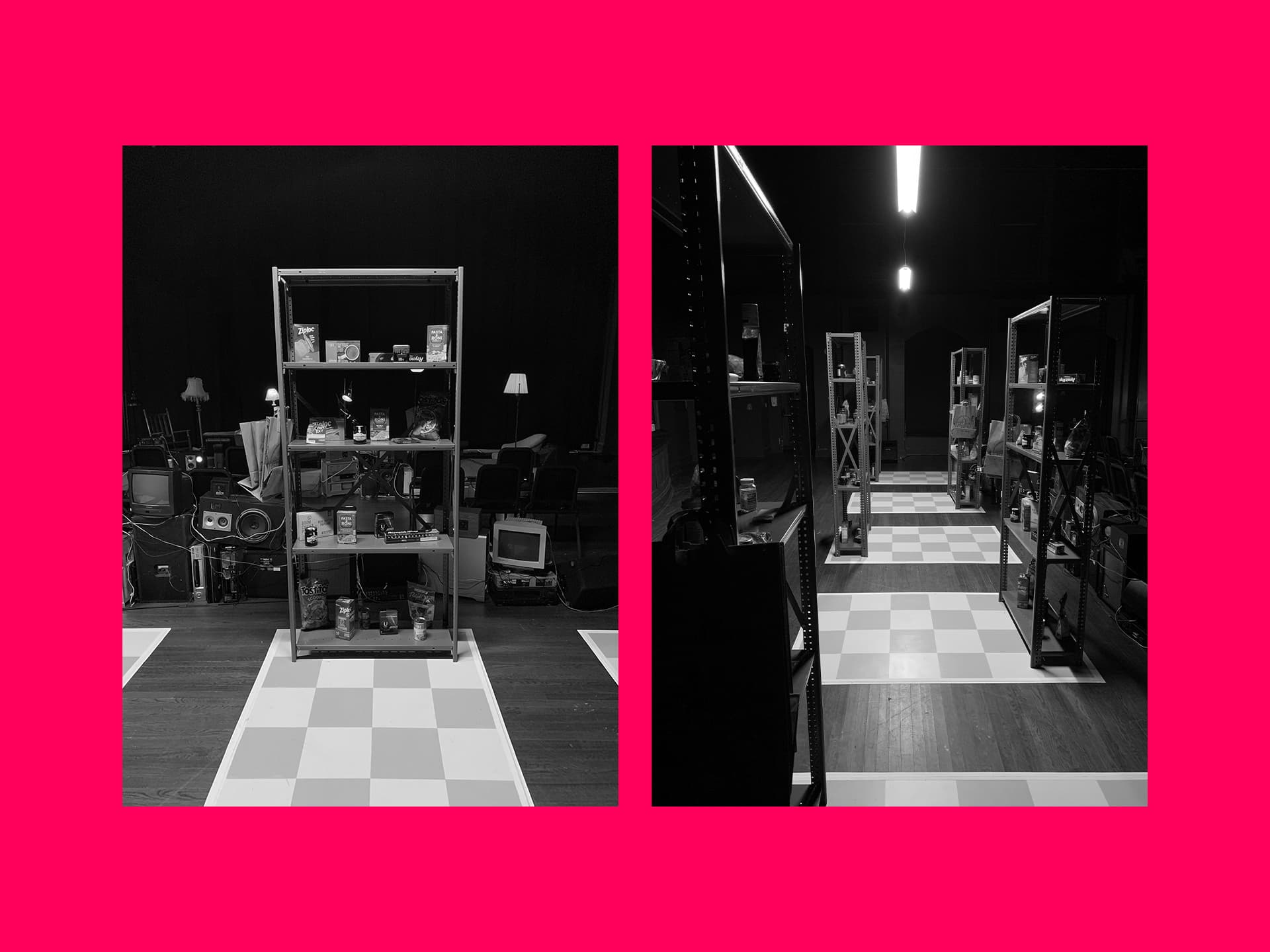 The pre-recorded voice then encouraged the audience to mimic a driving experience as if the participants were taking their groceries home. Individuals selected their "car" and the aural atmosphere of a road immersed the theater. This soundscape frequently stopped, indicating that an individual was not performing properly and as such the performance theoretically could not continue (which wasn't true). 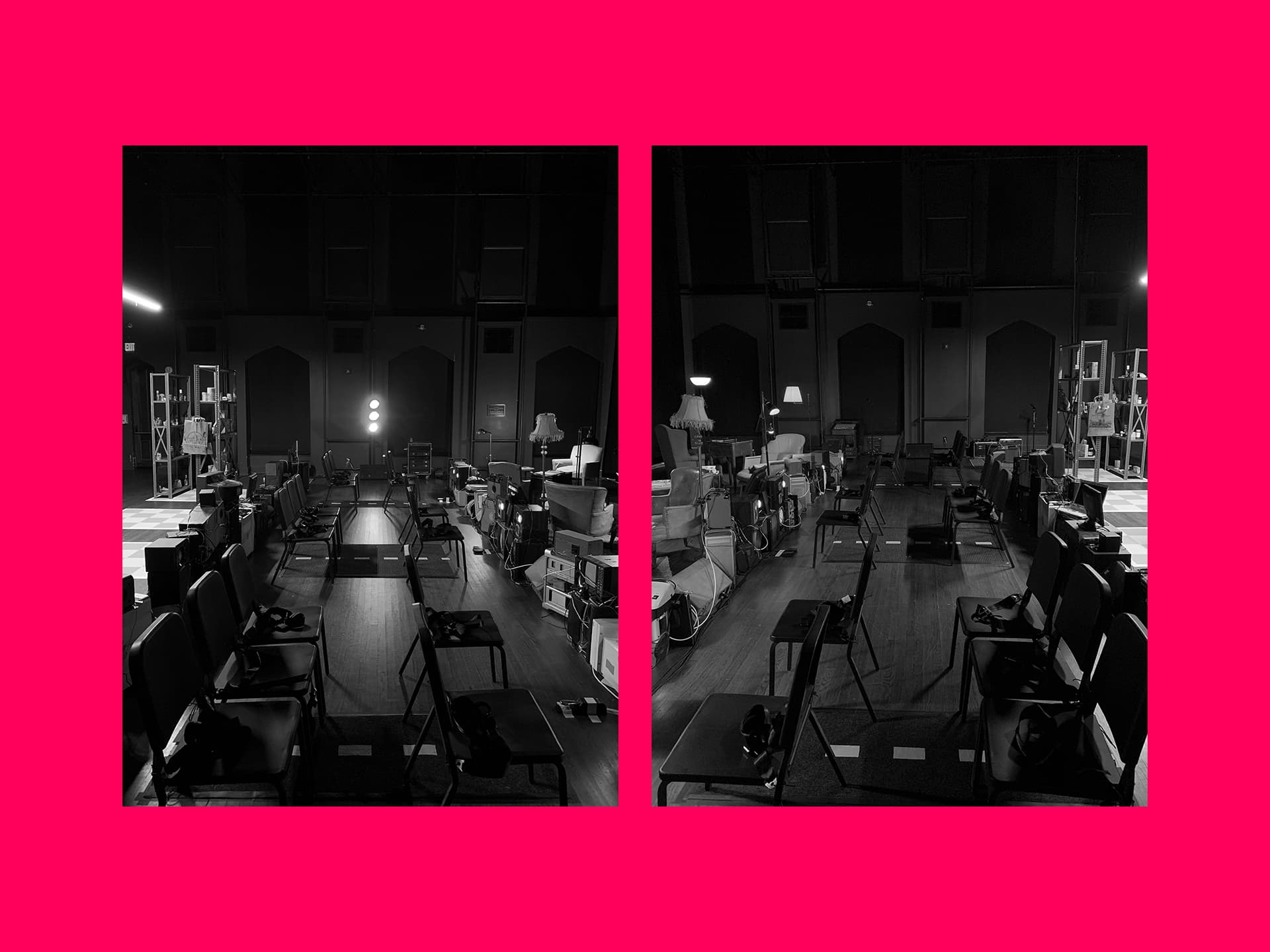 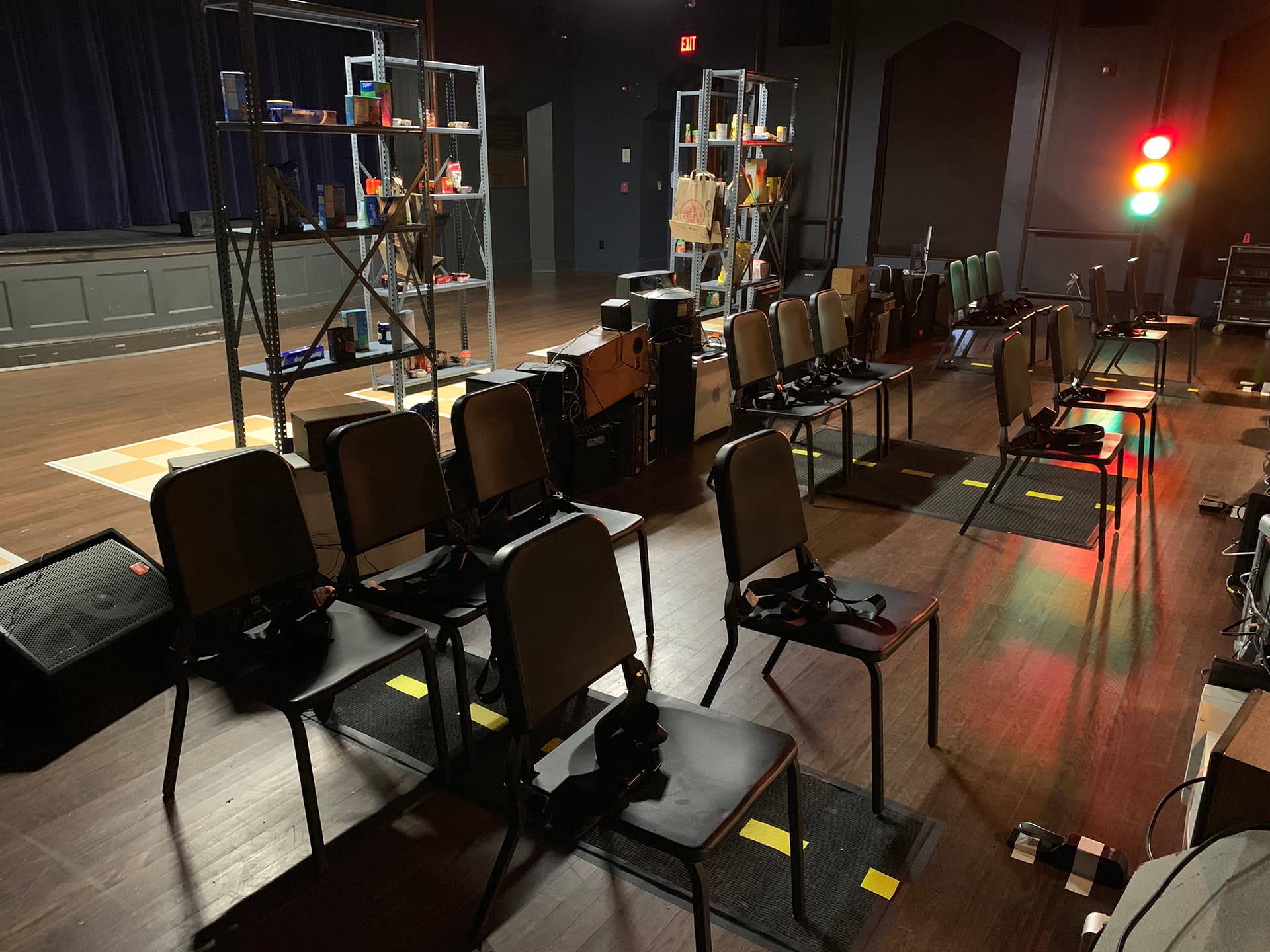 Finally, the instructions led the audience to a library-esque area, but the narration provided little direction at this point. Instead, I wanted to see how participants would interact with the space when given no additional direction. The results varied again from uneventful to chaotic—individuals sat and did nothing, talked into microphones for no one listening, or destroyed the food from the grocery store. In one performance, a group of people wrapped the grocery shelves entirely with tinfoil. In another, many people gathered on the stage, which was perhaps the only true off-limits zone (as I was sitting operating the show right behind a curtain). Finally, once someone chose to exit the theater, the performance would end. An usher would enter the space to blow an airhorn signifying to all that the show was over.

Putting together No Replica required the help of so many others who I owe endless thanks to. The tech-heavy process involved months of preparation and two weeks of setting up the theater. Below, you'll find a few behind-the-scenes looks at how the production came together. 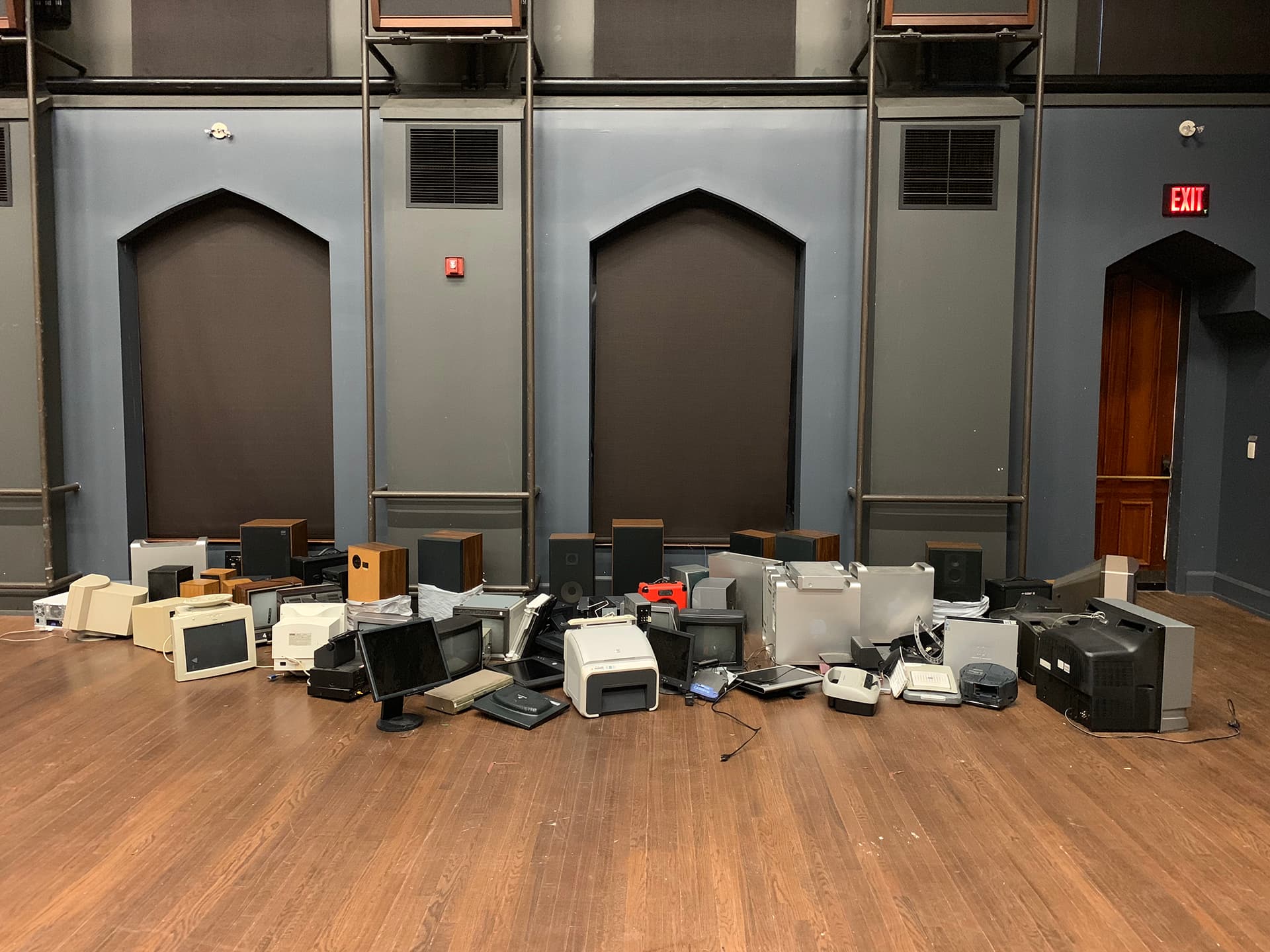 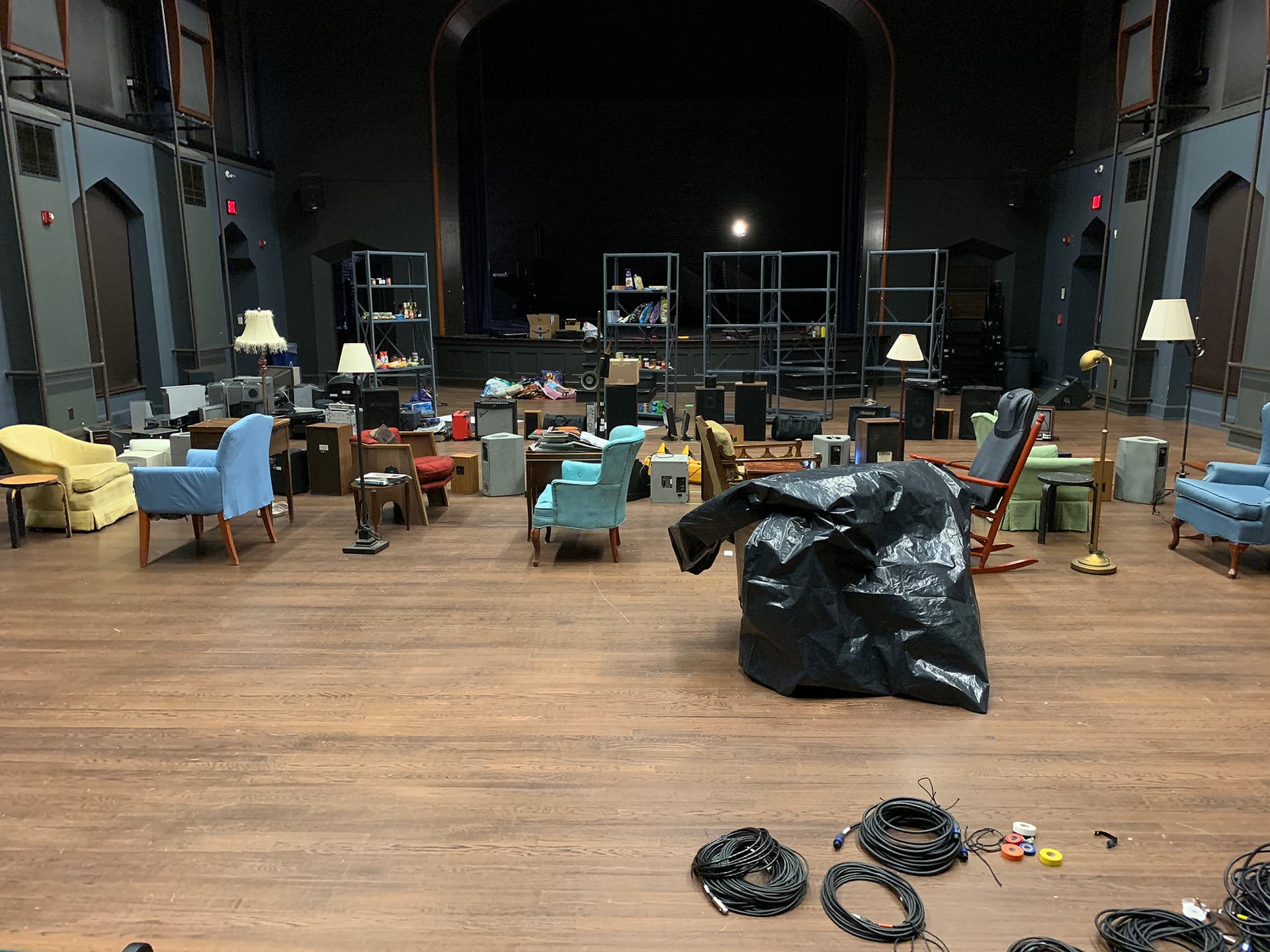 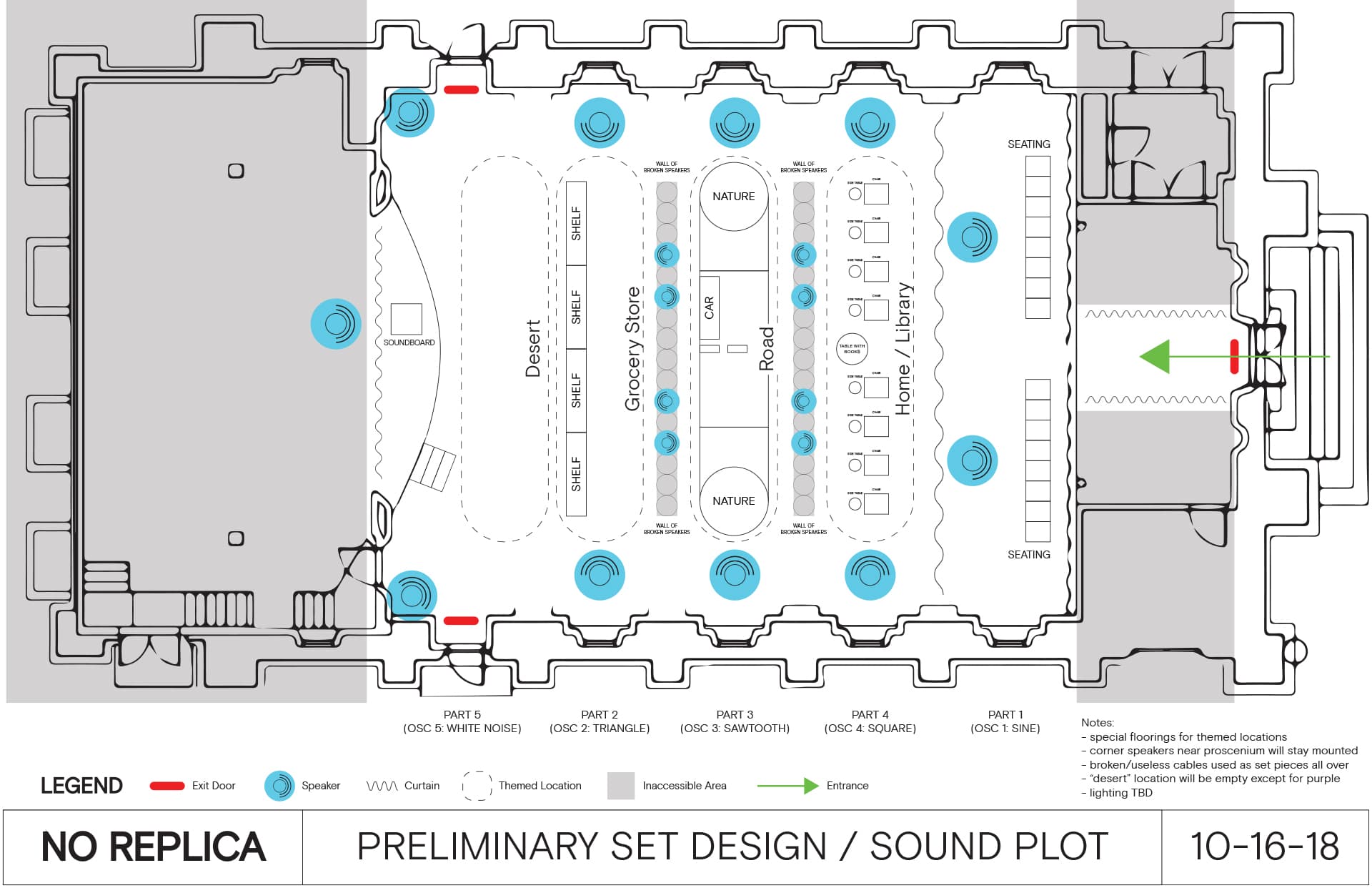